Maha Shivaratri is a Hindu festival celebrated annually in honor of the god Shiva. There is a Shivaratri in every luni-solar month of the Hindu calendar, on the month's 13th night/14th day, but once a year in late winter (February/March, or Phalguna) and before the arrival of spring, marks Maha Shivaratri which means "the Great Night of Shiva".

It is a major festival in Hinduism, this festival is solemn and marks a remembrance of "overcoming darkness and ignorance" in life and the world. It is observed by remembering Shiva and chanting prayers, fasting, doing Yoga, and meditating on ethics and virtues such as self-restraint, honesty, noninjury to others, forgiveness, and the discovery of Shiva.[5] The ardent devotees keep awake all night. Others visit one of the Shiva temples or go on pilgrimage to Jyotirlingams. This is an ancient Hindu festival whose origin date is unknown.

In Kashmir Shaivism, the festival is called Har-ratri or phonetically simpler Hearth or Hearth by Shiva faithful of the Kashmir region.

A festival of contemplation During the Vigil Night of Shiva, Mahashivaratri, we are brought to the moment of interval between destruction and regeneration; it symbolizes the night when we must contemplate on that which watches the growth out of the decay.  During Mahashivaratri we have to be alone with our sword, the Shiva in us. We have to look behind and before, to see what evil needs eradicating from our heart, what growth of virtue we need to encourage. Shiva is not only outside of us but within us. To unite ourselves with the One Self is to recognize the Shiva in us.

The celebration includes maintaining a "jaagaran", an all-night vigil and prayers, because Shaiva Hindus mark this night as "overcoming darkness and ignorance" in one's life and the world through Shiva. Offerings of fruits, leaves, sweets and milk to Shiva are made, some perform all-day fasting with vedic or tantric worship of Shiva, and some perform meditative Yoga.[9] In Shiva temples, "Om Namah Shivaya", the sacred mantra of Shiva, is chanted through the day.

Maha Shivaratri is celebrated over three or ten days based on the Hindu luni-solar calendar.[4] Every lunar month, there is a Shivaratri (12 per year). The main festival is called Maha Shivaratri, or great Shivaratri, and this is on 13th night (waning moon) and 14th day of the month Phalguna (Magha). According to the Gregorian calendar, the day falls in either February or March.[4]

Many legends explain the significance of Maha Shivaratri, one being it is the night of Shiva's dance.

According to a few God realized Yogis, Maha Shivaratri was the day when Shiva drank poisonous negativity to protect the world. The Maha Shivaratri is mentioned in several Puranas, particularly the Skanda Purana, Linga Purana and Padma Purana. These medieval era Shaiva texts present different mythologies associated with this festival, but all mention fasting and reverence for icons of Shiva such as the Lingam.[5]

Different legends describe the significance of Maha Shivaratri. According to one legend in the Shaivism tradition, this is the night when Shiva performs the heavenly dance of creation, preservation and destruction.[10][11] The chanting of hymns, the reading of Shiva scriptures and the chorus of devotees joins this cosmic dance and remembers Shiva's presence everywhere. According to another legend, this is the night when Shiva and Parvati got married.[10][12] A different legend states that the offering to Shiva icons such as the linga is an annual occasion to get over past sins if any, to restart on a virtuous path and thereby reach Mount Kailasha and liberation.

The significance of dance tradition to this festival has historical roots. The Maha Shivaratri has served as a historic confluence of artists for annual dance festivals at major Hindu temples such as at Konark, Khajuraho, Pattadakal, Modhera and Chidambaram.[13] This event is called Natyanjali, literally "worship through dance", at the Chidambaram temple which is famous for its sculpture depicting all dance mudras in the ancient Hindu text of performance arts called Natya Shastra.[14][15] Similarly, at Khajuraho Shiva temples, a major fair and dance festival on Maha Shivaratri, involving Shaiva pilgrims camped over miles around the temple complex, was documented by Alexander Cunningham in 1864.

Maha Shivaratri is a National Holiday in Nepal and celebrated widely in temples all over the country, but especially in the Pashupatinath temple. Thousands of devotees visit the famous Shiva Shakti Peetham nearby as well.Holy rituals are performed all over the nation. Artists from various classical music and dance forms perform through the night. On Maha Shivaratri, married women pray for the wellbeing of their husbands, while unmarried women pray for a husband like Shiva, considered as the ideal husband. Shiva is also worshipped as the Adi Guru (first teacher) from whom the yogic tradition originates. 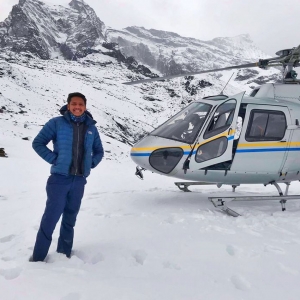 I, Dipendra is an Adventure Specialist and founder of Scenic Nepal Treks and working in Mountain Travel and Tourism for more than a decade.

I have been leading different Hiking groups from all around the World to the Himalayas including Everest Base Camp, Annapurna Base Camp, and many more.  Follow  me for my adventure on Facebook and Instagram